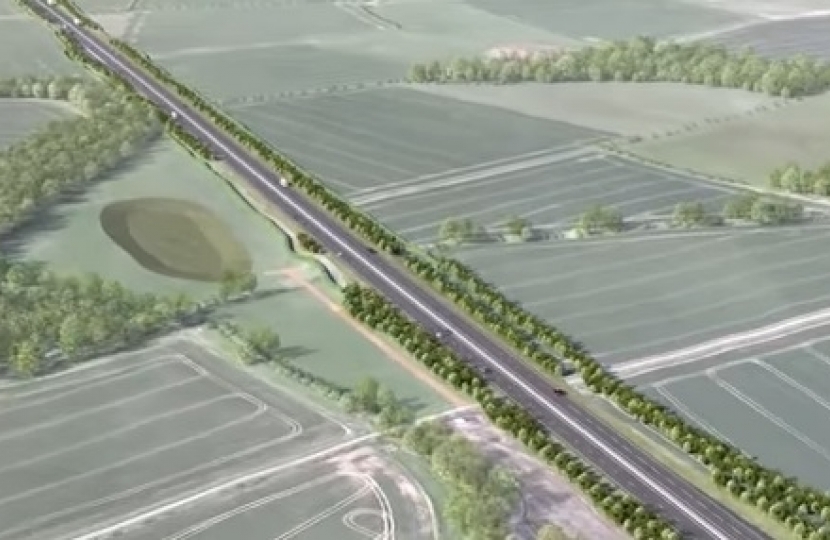 Anne-Marie has changed the Government’s mind on the importance of this forgotten stretch of road. Back on 2007 she set up the Dual the A1 Campaign Group in order to pull together many cross-party voices to make sure that Government would understand about the missing link in the A1 road network.

Fantastic news came in December 2014, when the Prime Minister announced an initial £290m investment to upgrade the road.

The campaign's ultimate goal is for full dualling all the way up to the border.

On 15th October 2015, Anne-Marie met with the Highways England team for update on plans to dual the A1 as far as Ellingham.

The Highways England team told Anne-Marie that good preliminary work has taken place throughout the year on environmental work, initial planning on potential routes for both the dualling part of the investment and the junction improvements and crawler lanes on the northern stretch.  They hope to have finalised routes and agreement from landowners likely to be affected for the 13 mile dualling stretch within the next 9 months, and to hold full public meetings to show the detailed worked out plans in the autumn of 2016.

"Building roads really isn’t straightforward, there are so many variables to join together and evidence to gather. Statutory bodies like the National Grid have to get any works on the gas main which runs alongside the existing road sorted out before diggers can start doing anything, for instance.

I am really encouraged by the detailed work already in place, and very impressed by the commitment and determination of the dedicated team at Highways England. They have a website set up at  http://www.highways.gov.uk/roads/road-projects/The-A1-in-Northumberland and you can register to get regular updates from them."

Anne-Marie is keen to get local people’s views on specific junction improvements, so they can be fed into the Highways England team and worked into the plans:

“As part of the planning works on where to do junction improvements, we need to explain to the team why stretches like the Adderstone Mains stretch coming round to Mousen Bends is in need of straightening out; and also we need your thoughts on how you think the West Mains/ Holy Island turning might best be improved, be it wider road, better slip road or a roundabout. In order to gather your views, I have set up a short survey on which you can share your views and experiences. By gathering as much up to date data as possible this will help the team to crystallise their detailed plans."

Anne-Marie's statement on the decision of 6 June to delay the formal go-ahead for the main groundworks of the A1 dualling scheme until December 2022.

Decision and reasoning for it can be read HERE

Anne-Marie Trevelyan – MP for Berwick-upon-Tweed – was invited to visit one of Highways England’s trench sites last week, which forms part of the extensive archaeological surveys presently underway as part of the ongoing plans to dual the A1 between Morpeth and Ellingham.

In a few weeks, I have a formal site visit with Highways England to inspect the initial works on the mammoth Dual the A1 project which has formed the cornerstone of my campaigning locally for many years.

I couldn't resist a sneak peek yesterday - video above!

The A1 dualling scheme is currently with the Planning Inspectorate, part of the final legal process these large infrastructure scheme undergo.

Anne-Marie Trevelyan held one of her regular update meetings with Mark Stoneman yesterday, who runs the Highways England A1 in Northumberland team.

MP encouraged by A1 progress

Anne-Marie Trevelyan, MP for Berwick-upon Tweed, has recently been updated on the progress on the huge A1 in Northumberland scheme which she has spearheaded since 2010.