Anne-Marie promoted to the Cabinet 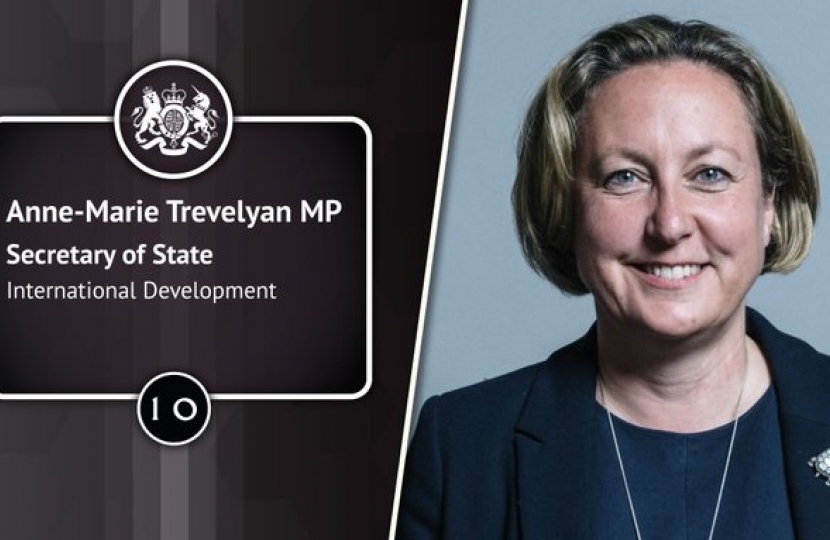 Anne-Marie Trevelyan, MP for Berwick-upon-Tweed, has been appointed to the Cabinet by Prime Minister Boris Johnson today.

The MP, who was recently made Minister of State for the Armed Forces, was called in to see the Prime Minister at Number 10 Downing Street, and asked to join the Cabinet as Secretary of State for International Development.

The Department leads the UK’s work to end extreme poverty. We are tackling the global challenges of our time including poverty and disease, mass migration, insecurity and conflict. Our work is building a safer, healthier, more prosperous world for people in developing countries and in the UK too.

Anne-Marie said of her appointment:

“I am delighted to be appointed International Development Secretary for this government, which has committed to invest 0.7 per cent of our income on development.

“I know from my previous role as Armed Forces Minister how UK aid, alongside our world class defence and diplomacy, supports peace and prosperity around the world.

“I want to show the British public we are delivering the best results for their aid, transforming the lives of the world’s poorest and most vulnerable people, while promoting Britain’s economic and security interests.”

You can find out more about the work the Department does HERE.

Anne-Marie Trevelyan, MP for Berwick-upon-Tweed, recently paid a visit to Purdy Lodge in her constituency.  The Lodge is a well-known family-run hotel on the A1 between Berwick and Alnwick.