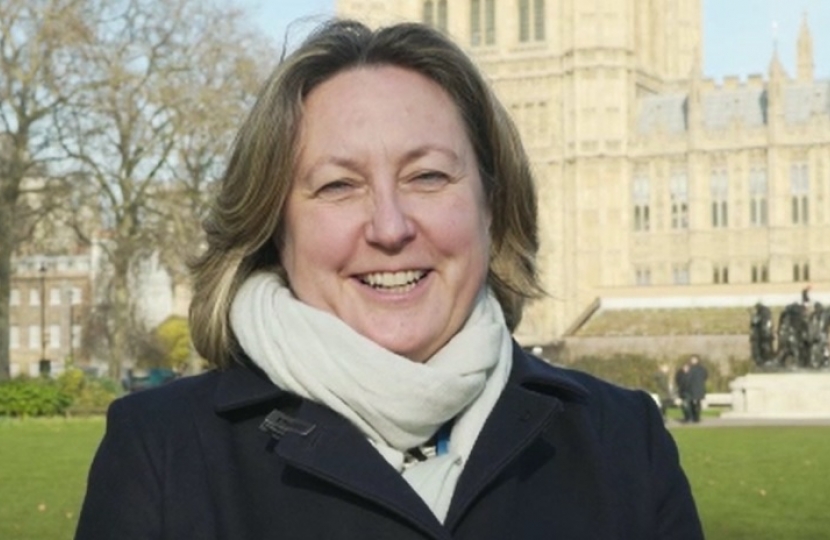 Anne-Marie spoke to the Telegraph's Lucy Fisher (original HERE) on her role as Trade Secretary:

Britain will once again become a "dealmaking nation" as it prepares to join the trans-pacific partnership and launch four more negotiations next year, Anne-Marie Trevelyan has declared.

The International Trade Secretary vowed that 2022 will be a "five-star year" for her department, as she looks to commence formal negotiations on new UK deals with Canada, Mexico, the Gulf Cooperation Council and India.

Her plan is to target countries and blocs that were worth £140 billion in bilateral trade last year, including securing accession to the Comprehensive and Progressive Agreement for Trans-Pacific Partnership -a major trade union of 11 Pacific nations.

In an interview with The Telegraph, Ms Trevelyan set out her vision for "DIT [Department for International Trade] 2.0" after the "unenviable" era of Liz Truss, her predecessor , who secured 68 "rollover" agreements following Brexit.

The Trade Secretary said that following Britain's departure from the EU: "I want us to really get back to being a dealmaking nation, on the back of both our unique and world-renowned consensus-building skills, of which Cop26 obviously has just been an extraordinary demonstration, and the UK's uniquely respected role in the world across so many levels."

UK must capitalise on its 'amazing strengths'

On Monday, she will outline her approach to trade in a changing global economy when she gives the keynote speech at the Margaret Thatcher Conference on Trade, hosted by the Centre for Policy Studies think tank, in partnership with this newspaper.

She will say that Britain must "capitalise" on its "amazing strengths", highlighting the country's record as the world's second largest services exporter, fifth biggest exporter of digital tech services and a global leader in finance, green tech, life sciences and creative industries.

"This in turn will create jobs, opportunities and prosperity across every part of our United Kingdom, while championing the cause of free markets, free enterprise and free trade," she will say.

However, she will also stress the need to be realistic about the "seismic shifts" in economic gravity, which is continuing to shift to the East.

"These are trends we cannot afford to ignore," Ms Trevelyan will warn, as she sets out her plan to target the region as part of a strategy "focusing not on the next quarter or year, but the decades to come".

Negotiations with the Trans-Pacific bloc are going well, Ms Trevelyan indicated while talking to The Telegraph. Britain is currently answering detailed questions about domestic legislation in key areas and has so far passed "with flying colours".

Discussions on tariffs, areas for liberalisation and sectors in which protections will remain will follow, but she is "hopeful we will be able to accede" next year.

Trade talks with India are set to launch at the beginning of 2022, with Ms Trevelyan expected to visit the country as early as January for meetings with her Indian counterpart.

She has set an ambition to reopen negotiations with Canada and Mexico in the first six months of the year. While post-Brexit "rollover" deals have been secured with both nations, they also agreed to "look at doing more" to boost bilateral trade next year.

Her announcement comes after the Prime Minister conceded in September that Joe Biden is not striking trade deals, scotching hopes of a swift UK-US pact. It also suggests the UK is not planning to pursue in the short-term a bid to join the US-Mexico-Canada trade deal, following reports of such a plan.

Alongside Ms Trevelyan's focus on bolstering overseas trade, she is closely monitoring UK-EU talks on resolving the disruption to trade in Northern Ireland caused by the post-Brexit pact.

The discussions are "progressing rather slowly and painfully" but are "progressing", she said, as she heavily played down the prospect of London triggering Article 16 this year.

"I don't think anyone's calling Article 16 before Christmas, absolutely not," she said of the mechanism that would see the UK attempt to unilaterally suspend parts of the Brexit agreement over Northern Ireland.

She added that Lord Frost, the Brexit Minister, and his counterparts "will plod on doing the work that negotiators do".

She added: "I'm, as ever, profoundly confident in Lord Frost's ability to find a steady way through that ensures that those who live on the island of Ireland can do so in peace and tranquility."

Anne-Marie Trevelyan: The 'Thatcher baby' who sees herself as a 'Sainsbury's and Morrisons Tory'

Anne-Marie Trevelyan is a self-proclaimed "Thatcher baby" who declares her intent to harness the Iron Lady's toughness and sense of purpose in her role as International Trade Secretary.

It is fitting, therefore, that she is due to give the keynote address at the Margaret Thatcher Conference on Trade in London on Monday, where she will set out her approach to trade.

Speaking to The Telegraph ahead of the address, the Berwick upon Tweed MP, 52, recalls being 10 years old when Mrs Thatcher became prime minister.

"She was my political lead in my formative years as a teenager," she said. "And that sense of purpose, that clarity of thought, that willingness to plough through difficult situations because she could see where she wanted the UK to be...I think that's me all over."

Britain's first female prime minister was "a global player, a global leader, who believed in getting the world to a better place", Ms Trevelyan added.

"I think Boris's commitment to that and indeed the UK presidency of Cop26 has set us in that framework. We need to make sure that we continue to drive that forward and use our trade for good in every sense."

Britain must be 'right at the forefront' of net zero bid

The International Trade Secretary, is adamant that Mrs Thatcher was right that boosting trade and economic activity is one of the best ways to "help the poorest to come out of poverty".

She added: "Some things don't change, perhaps. Maybe it's the Thatcher in all of us who were born in the 60s and 70s."

Where she strikes a more modern pose is in her passion for environmental causes. A former energy minister, this zeal extends to her personal life-she is currently restoring a 14th century stone Northumbrian house to become carbon neutral.

It is an agenda she places at the heart of her frontbench trade job, too. In the wake of Cop26, Britain must aim to be "right at the forefront" of exporting green technologies to help the world strive towards net zero, she said.

The UK will use its "core industrial strengths" in nuclear and shipbuilding to sell clean energy and "ocean management, protection, exploration" around the globe. Green trade is "a huge, huge economic opportunity for us to help other countries crack on with what is a really difficult, but critically important, challenge of turning their economies green too", she added.

She also highlighted her ambition to boost British services exports. "We're already the second highest services exporter in the world," she said. "We are utterly brilliant at that. I'd like us to be first, obviously, and as you can imagine so would the PM, so he's set me that challenge."

It is likely to be an uphill challenge, however. Britain exported services worth $343 billion last year, lagging far behind the record-holding US-where service exports totalled $692 billion, according to the World Bank.

Ms Trevelyan has also previously served as a defence minister and is aware of the way in which trade can deepen military pacts. She welcomed the treaty signed between London and Kiev that will see Britain sell warships and missiles to Ukraine , amid fears of a fresh Russian invasion.

Now she is determined to use the nation's expertise in shipbuilding and maritime engineering to "support allies" elsewhere who want to defend their own freedom, like the Ukrainians.

Asked whether she views Britain's ability to build and sell warships as a key pillar of the Government's strategy to counter Moscow, she dodged the question diplomatically: "We want to work with allies and friends across the piece," she said.

Talking of the opportunities to collaborate with Nato nations and other allies, she said: "We can bring skills which they simply don't have at their disposal domestically to help them grow that". It brings the additional benefit of helping the UK to "strengthen and build our own capabilities for our needs" in defence.

The Trade Secretary treads a similarly careful line on Beijing, declaring Britain keen to secure more bilateral trade with China-which she described as a "great" and "important" trading partner.

At the same time, she stressed the need to "consider how we choose investors and how we trade" in "strategic areas"-reflecting the Government's shift away from permitting Beijing's involvement in sensitive domestic sectors in recent years, amid security fears.

She also acknowledged that "the challenge of market distortion is without doubt very real" when asked about concerns over some of China's trade practices, such as its role in the global overproduction of steel and aluminium.

While critics deride the World Trade Organization as an ineffective talking shop, Ms Trevelyan insists it "remains the right place for those conversations at a global level" on resolving trade frictions.

In a dispute closer to home about animal welfare standards -and whether they should be maintained in trade deals to protect UK farmers, or liberalised to allow the import of cheap meats to help hard-up British families-she is firmly in favour of retaining tough restrictions.

"We continue, and quite rightly, to have some of the highest animal welfare standards in the world and I think that's great," she said.

"No goods are going to be sold on our shelves that don't meet our high standards. That's not in question."

The trade deals she is looking to target next year will provide "amazing opportunities" for British farmers to sell their meat and agricultural products overseas, she added. It comes after controversy erupted over a trade deal carved out between Britain and Australia, which critics say will lower animal welfare and food standards-harming UK agriculture.

In the battle raging between the "Waitrose Tories", who are regarded as protectionists backing high-quality but expensive local products from British farms, and the "Lidl Tories", free marketeers who insist food standards can be combined with lower cost imports on the shelves, it sounds like Ms Trevelyan backs the former.

She laughed and protested: "I'm a Sainsbury's and Morrisons Tory. That's what we've got in the North East."

Warming to her theme, she added: "You go into Waitrose because you want to buy a thing, but you always come out with all sorts of lovely things and you've spent £50. It's insane. I can't do that. I've done that once or twice in my life and I'm like: 'No, urgh, that wasn't the plan!". I'm a Sainsbury's or Morrisons girl, me."