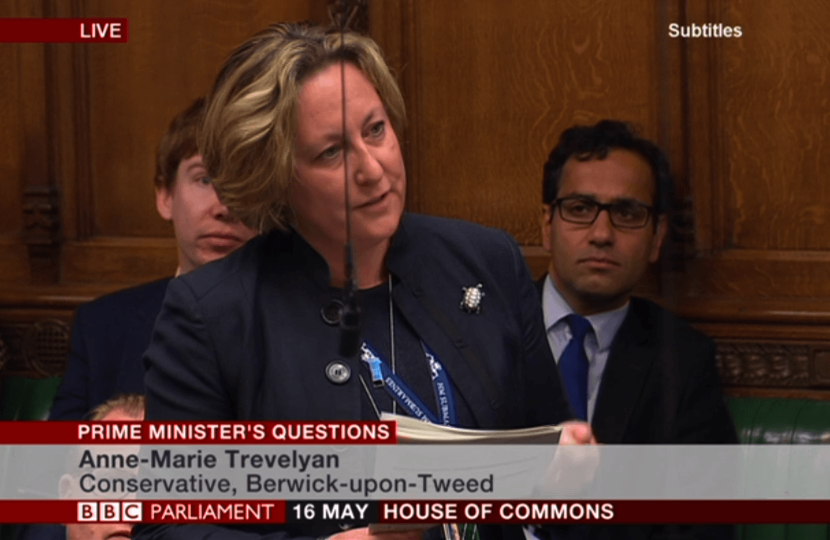 Anne-Marie and the Save Rothbury Community Hospital Campaign group have been campaigning for transparency on the decision making process and for the beds to be re-instated. The Independent Reconfiguration Panel is currently studying the situation and will report its recommendations to the Secretary of State for Health in due course.

“The 12 in-bed provision at Rothbury Community Hospital in my constituency was removed without adequate consultation back in September 2016. The Save Rothbury Hospital campaign and I have worked closely together to get transparency on that decision and return the in-bed provision for our vast and sparsely populated Coquet valley. Does the Prime Minister agree that the NHS should be investing in community hospitals, which can provide that low-level nursing for convalescence and palliative care for my constituents and others, and will she support our campaign to get it back?”

The Prime Minister responded by saying;

“My hon. Friend is absolutely right to be raising this issue on behalf of her constituents in the way that she is. I understand this issue is currently being considered by the Independent Reconfiguration Panel, which will then advise my right hon. Friend the Health Secretary. I am sure my hon. Friend will recognise that, as the issue is under an independent review at present, I will not go into further detail on the specifics, but on the general point I wholeheartedly agree with her that community hospitals are a vital part of the range of services we want to see in our NHS.”

Following the session Anne-Marie commented “This has been a long running process with debates in the House of Commons, meetings with the Secretary of State for Health, and now we have taken this issue all the way to the top of Government. I am delighted the Prime Minister wholeheartedly agrees on the importance of community hospitals, and investing in them, which is a boost in the current circumstances.”

“The in-bed provision is vital for rural areas such as ours, and releases pressure on other NHS services with its important nursing capability for convalescence and palliative care. Alongside the campaign group, which has worked tirelessly to save the 12 beds, I will be continuing to fight to ensure that the community gets the in-bed provision returned.”