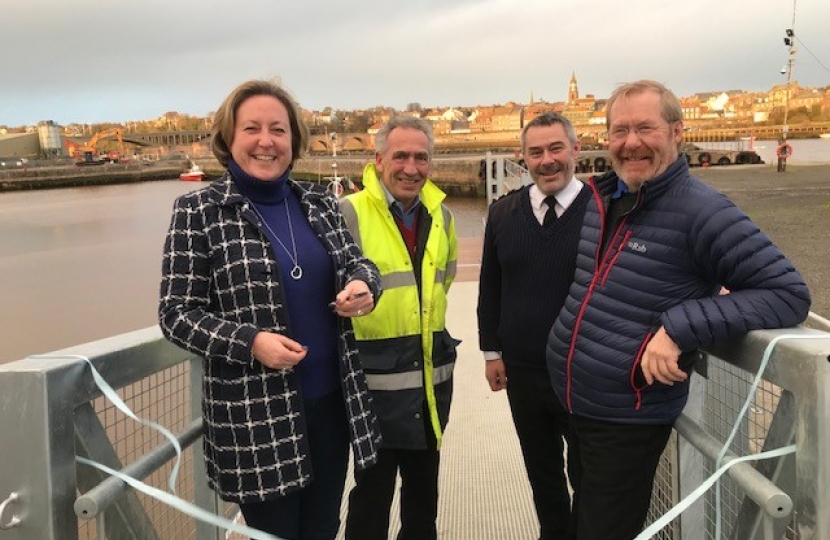 Anne-Marie Trevelyan, MP for Berwick-upon-Tweed, was delighted to open the new jetty at Berwick Harbour on Friday, built with a £2million grant from the Government’s Coastal Communities Fund.

The MP, who was invited to cut the ribbon by Berwick Port Authority, worked to support Berwick Port CEO Alan Irving and his team in their bid to the CCF for funding, and was honoured to have been invited along to see the new jetty for herself and to officially open it.

She said:  “This is a great day for Berwick and for the port. The addition of the new pontoon is such a wonderful new asset for our town. It was a pleasure to welcome the Minister here last April to make the announcement of funding, and it is an even bigger honour to be asked to open the new jetty. It is another example of new investment into Berwick and it a credit to Alan Irving, Andy Richardson [Chairman of Harbour Commissioners] and the team and the finished result Iooks fantastic.”

The MP also paid tribute to Bill Parkin and the team from SWP Engineering, who were responsible for fitting the pontoon to its moorings. After the official opening ceremony, Anne-Marie was taken into the estuary to see the pontoon from the seaward side.