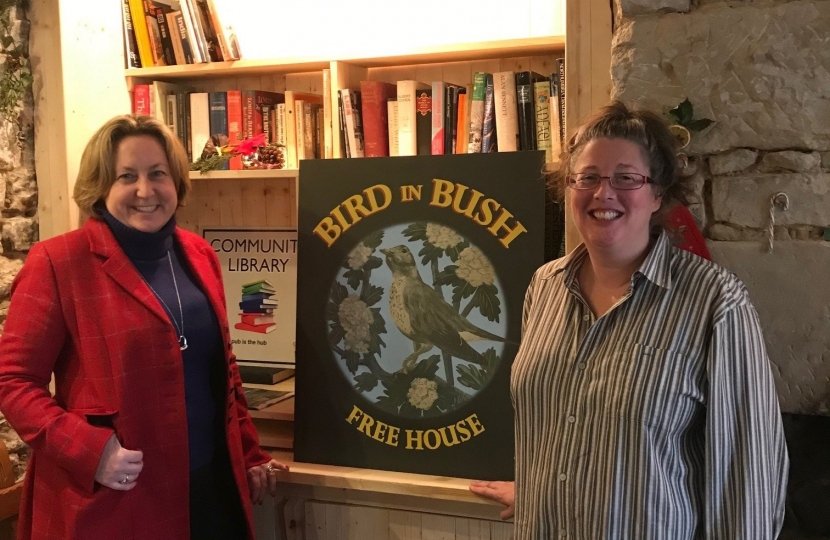 Anne-Marie Trevelyan, MP for Berwick-upon-Tweed, recently visited Elsdon to see for herself the fantastic new library scheme being operated by the local pub landlords.

The village had benefited from a library bus which visited regularly but became damaged in a flood, so ceased operation. Pub landlords, Katie Bland and Stephen Shaw decided to set up a community library service in the Bird in Bush instead, to provide a real hub for villagers. Local people brought in their unwanted books to get things going, but Katie and Stephen hope to work with Northumberland County Council Library Services to offer a “click and collect” service for book borrowing from the pub.

Anne-Marie said: “It was great to meet Katie and Stephen and hear about their plans to provide village services from their pub.  I was also impressed with the transformation they have made of the place, which looks incredible and serves some amazing food and ales. The Bird in the Bush is now an integral part of village life and a real example of what can be achieved even in small rural communities.”

The pub featured in a recent festive episode of the BBC’s Countryfile, in which villagers praised the pub’s welcoming atmosphere, especially in tackling rural loneliness.

Photo: Anne-Marie with pub landlord Katie Bland in the Bird in Bush pub.

Anne-Marie Trevelyan, MP for Berwick-upon-Tweed has welcomed the Education Secretary’s announcement of huge increases to schools funding, which will especially benefit smaller schools.