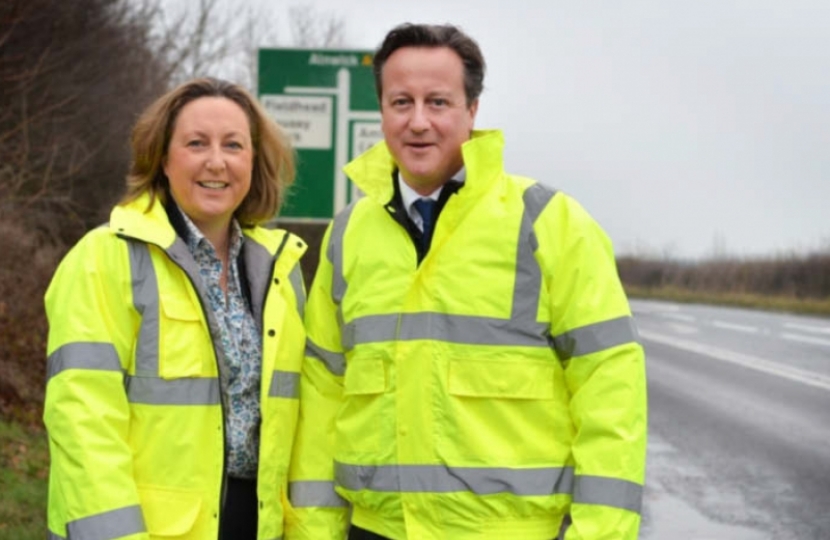 Anne-Marie Trevelyan, MP for Berwick-upon-Tweed has met with the Highways England team for update on plans to dual the A1 as far as Ellingham.  Mrs Trevelyan is campaigning for the A1 to be dualled to the border and beyond, and was able to secure £290million in funding from the Chancellor, George Osborne, in order to get the first part underway.

The Highways England team told Anne-Marie that good preliminary work has taken place throughout the year on environmental work, initial planning on potential routes for both the dualling part of the investment and the junction improvements and crawler lanes on the northern stretch.  They hope to have finalised routes and agreement from landowners likely to be affected for the 13 mile dualling stretch within the next 9 months, and to hold full public meetings to show the detailed worked out plans in the autumn of 2016.

"Building roads really isn’t straightforward, there are so many variables to join together and evidence to gather. Statutory bodies like the National Grid have to get any works on the gas main which runs alongside the existing road sorted out before diggers can start doing anything, for instance.

I am really encouraged by the detailed work already in place, and very impressed by the commitment and determination of the dedicated team at Highways England. They have a website set up at  http://www.highways.gov.uk/roads/road-projects/The-A1-in-Northumberland and you can register to get regular updates from them."

Anne-Marie is keen to get local people’s views on specific junction improvements, so they can be fed into the Highways England team and worked into the plans:

“As part of the planning works on where to do junction improvements, we need to explain to the team why stretches like the Adderstone Mains stretch coming round to Mousen Bends is in need of straightening out; and also we need your thoughts on how you think the West Mains/ Holy Island turning might best be improved, be it wider road, better slip road or a roundabout. In order to gather your views, I have set up a short survey on which you can share your views and experiences. By gathering as much up to date data as possible this will help the team to crystallise their detailed plans."