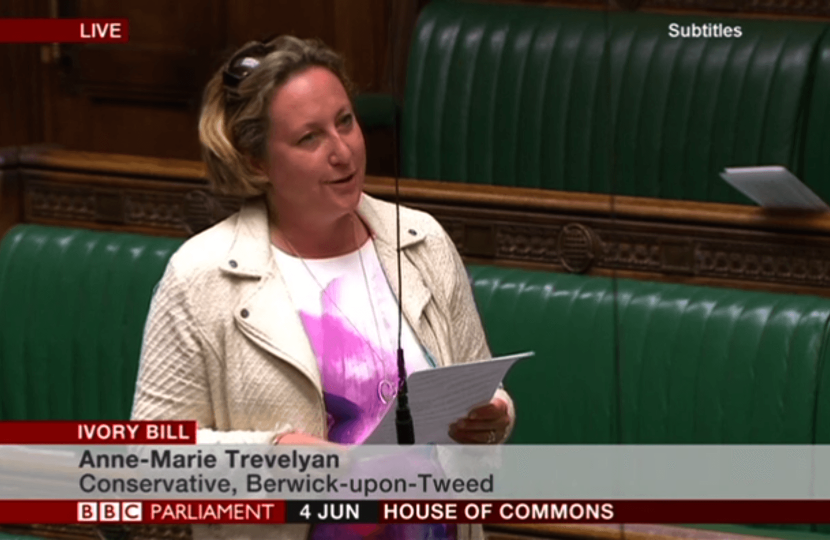 Anne-Marie Trevelyan, MP for Berwick-upon-Tweed has secured a key exemption for Northumbrian Pipers’ from a Government Bill to enact a ban on commercial dealing in ivory in the UK that could directly or indirectly fuel the poaching of elephants, as well as the import and re-export of ivory for commercial use.

The ban will be amongst the toughest in the world and will cover ivory items of all ages – not just those produced after a certain date. The Bill provides for certain narrowly-defined and carefully-targeted exemptions for items which do not contribute to the poaching of elephants, which include musical instruments created before 1975.

The intention of this Bill is to help protect elephants from poachers motivated by the profits to be gained from the illegal trade in ivory. Since 2006, the total number of elephants in Africa has decreased by approximately 20%, primarily due to poaching. This poaching is driven by consumer demand for, and speculative acquisition of, ivory.

Anne-Marie, whilst being extremely supportive of the Bill, has listened to the concern of the Northumbrian Pipers’ Association, who believed that without a further exemption for their equipment, the Bill could inadvertently cause severe damage to the musical heritage of Northumberland.

Anne-Marie said “I am delighted to support the Bill and to ensure that the UK leads the world in tackling the scourge of the illegal wildlife trade. There are, sadly, so many species of wildlife across the earth that need our protection from all manner of viruses, diseases, human poaching and destruction of habitat. The poaching and hunting of elephants for ivory is decimating elephant numbers, maiming and killing those sentient animals in the most cruel fashion, and fuelling serious and organised crime which has led to corruption in many of the states where elephants are poached.”

“The WWF has been clear that they believe some exemptions such as those in the Bill, will not have a negative impact on poaching or the illegal ivory trade. With this in mind, I asked the Minister to consider one further narrow exemption that I as a Northumbrian MP believe is important for our musical heritage and which should be included in the scope of the exemptions for older musical instruments. In the north of our great country, the pipes—bagpipes and Northumbrian—have been a military and cultural part of our heritage for centuries, and pipers have a particularly long history in Northumberland. Most of our Northumbrian pipe makers are retiring, including the amazing David Burleigh from the village of Longframlington in my constituency, and the Northumbrian Pipers’ Society relies heavily on second-hand ​sets to fill the gap. It was vital for the future of the Pipers’ to get this exemption.”

The Minister, David Rutley, spoke at the end of the Bill and accepted the exemption that Anne-Marie called for by saying “ However, it should be noted that the ban will not prohibit owning, inheriting, donating or bequeathing ivory that is currently permitted. That will extend to Northumbrian pipes, which my hon. Friend the Member for Berwick-upon-Tweed (Mrs Trevelyan) will be pleased to hear.”

Following the debate, Anne-Marie said “My favourite film, with its elephant Jungle Patrol, was Jungle Book, and Northumbrian Pipes’ are an extremely important part of our heritage, so I am delighted that two things of such importance to me and many others are on their way to being protected today and I am delighted the Minister supported this crucial exemption.”