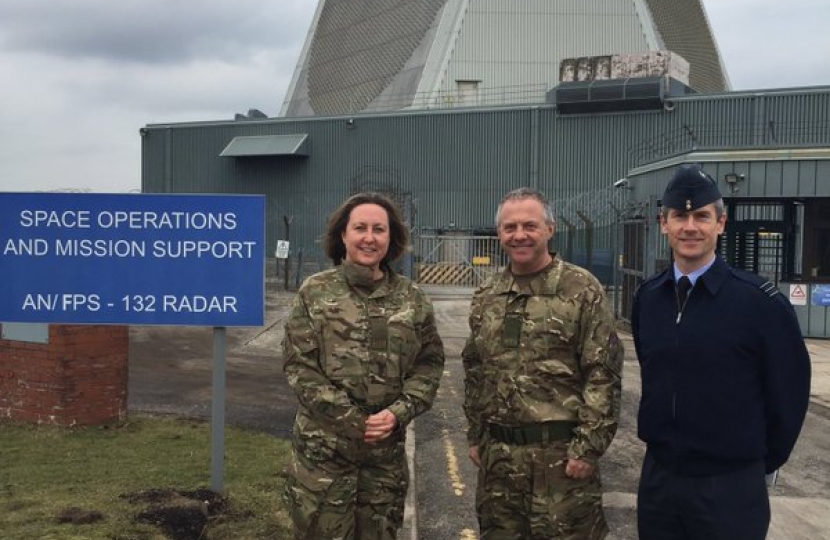 Berwick MP Anne-Marie Trevelyan visited RAF Fylingdales in the North York Moors today, on her way down to Westminster.

The primary role of RAF Fylingdales is to maintain an uninterrupted missile warning service, protecting the nation from a surprise missile attack. The Unit’s secondary role is space surveillance. Satellites in low Earth orbits, and decaying orbits of space objects re-entering the atmosphere, can easily resemble an incoming missile in flight; therefore, an accurate database of all man-made objects in space is of prime importance to prevent false indications of a missile attack.

Anne-Marie was visiting the base as part of her involvement in the Armed Forces Parliamentary Scheme’s RAF branch, and toured the facility alongside Labour MP John Mann.

She said of the visit: “This was an excellent visit to one of our quietly unsung RAF bases. I was so pleased to meet the whole team, from police dogs who patrol the isolated site on the Yorkshire Moors to the engineers and computer specialists who manage the radar station and all the monitoring. I learned a great deal about space management, and was shocked to discover just how much space junk is floating around, travelling at unbelievable and damaging speeds if they hit satellites, which we have to monitor. It is such a privilege through the Armed Forces Parliamentary Scheme to be able to spend some time talking informally with military and civilian personnel who do so much to keep our great nation safe; in Fylingdales' case in close conjunction with the USA.”