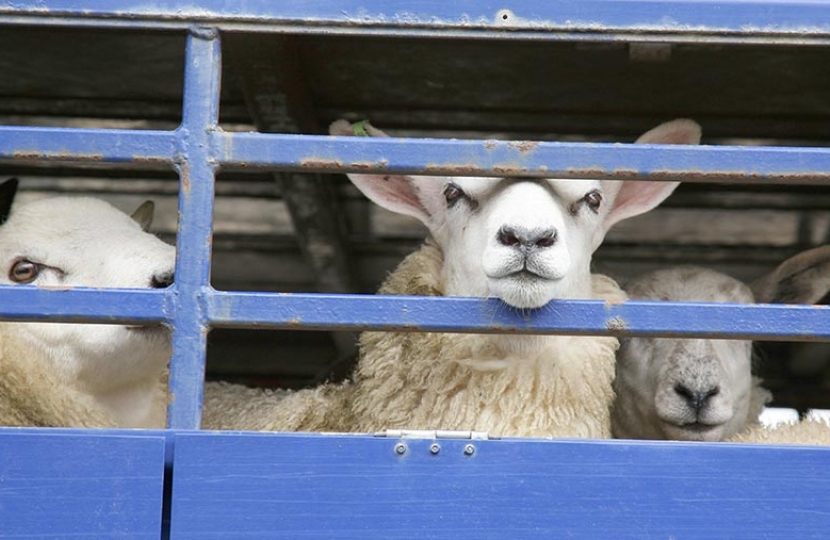 Anne-Marie Trevelyan, MP for Berwick-upon-Tweed, has welcomed today’s launch of a Government consultation to deliver on a manifesto commitment to end excessively long journeys for animals going for slaughter and fattening.

The UK Government and the Welsh Government will be consulting to end live animal exports for slaughter and fattening where the journeys begin or transit through England or Wales, as well as consulting on other improvements to animal welfare in transport more generally.

The Government is proposing that the export of livestock and horses for slaughter or fattening, where the animals will be slaughtered within 6 months of their arrival, would be prohibited. In addition, export journeys for slaughter and fattening that use England or Wales as a land-bridge would not be permitted, i.e. export journeys beginning in Scotland, Northern Ireland or indeed EU Member States, such as the Republic of Ireland, destined for a country outside the UK, would not be able to travel through England or Wales en route to their final destination.

The proposal will not impact on domestic slaughter and fattening movements, so slaughter and fattening journeys between England, Scotland, Wales, and Northern Ireland would still be permitted. There are no proposals to ban exports of poultry, or animals being exported for breeding purposes, as it is believed these journeys can continue to take place providing the welfare of the animals is suitably protected.

“I am so pleased we are delivering on our promise to ban the live export of animals for slaughter, something the UK is able to do now we have left the EU.  I know from my email inbox over the years how strongly many feel about this issue.  Our proposals aim to address those public concerns. Ending live exports for slaughter and fattening signals our intention to continue being a world leader in animal welfare by maintaining and strengthening our already high animal welfare standards. As well as banning live export for slaughter, the consultation also proposes to improve the general welfare of animals in transport.  I would encourage everyone with an interest in this to take part in the consultation.”

The Department for the Environment, Food and Rural Affairs (Defra) is also consulting on proposals to generally improve animal welfare in transport, such as new maximum journey times, new requirements for thermal conditions and ventilation, space and headroom allowances and tighter rules for transporting live animals by sea. These proposals might have potential impacts on domestic animal movements, and these have been taken into account in developing the policy. An impact assessment has been prepared to outline the possible costs and benefits of the proposed reforms, which will be published during the consultation period.

Link to the consultation: https://consult.defra.gov.uk/transforming-farm-animal-health-and-welfare-team/improvements-to-animal-welfare-in-transport/