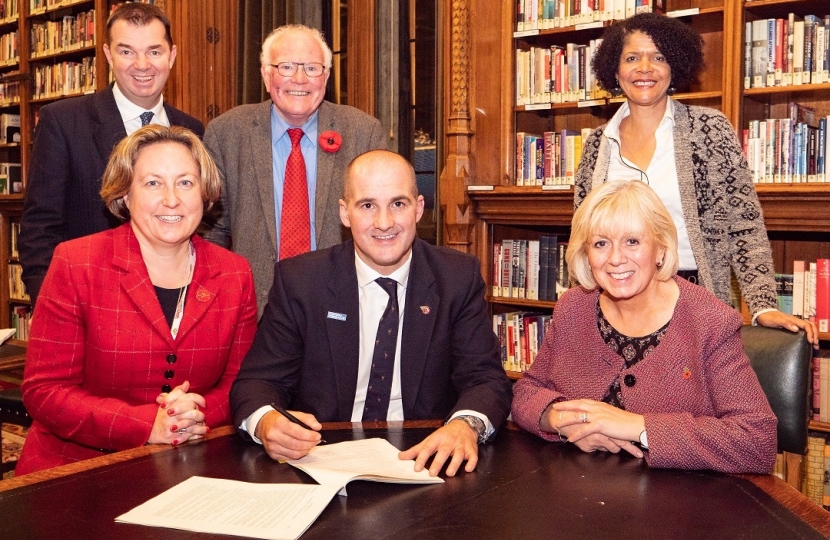 Anne-Marie Trevelyan, MP for Berwick-upon-Tweed joined fellow north east MPs from across the political divide to witness the Northern Powerhouse Minister, Jake Berry MP, sign the historic “North of Tyne Devolution Deal” which transfers powers and funding over from Westminster to the north east.

The deal, which has been years in the planning and involved discussions and agreements between the Government and north east local authorities, includes Newcastle, North Tyneside and Northumberland local authorities and is expected to generate £1.1 billion for the local economy, 10,000 new jobs, and drive over £2.1 billion in private sector investment, the landmark deal will provide a major economic boost for a key region within the Northern Powerhouse.

Anne-Marie, who served on the Parliamentary committee which finalised the details, said: “This is a great boost for the north east and signals the Government’s commitment to investing in and supporting our region. There has been a lot of hard work from the Government and the local authorities to get to this stage, and it is going to deliver power to local people. It presents a real opportunity to funnel investment into local priorities as well as deliver growth and more jobs for the north east.  I am proud to have been able to sit on the Committee in Parliament, and to join colleagues and the Minister to witness the deal becoming law.”

Northumberland County Council Leader, Councillor Peter Jackson said: So much work has gone into securing the best deal for the North of Tyne and I’m delighted we can now move forward with the real business of driving the region’s economic growth.

“We’re working on a number of exciting and transformative schemes which will benefit millions of people in the region now, as well as future generations, and we are all excited by the opportunities that lie ahead.”

An inaugural cabinet meeting at Morpeth Town Hall will assign cabinet roles and responsibilities, set the budget for 2018 to 2019, and agree a timetable for the selection of an interim mayor to support the North of Tyne Combined Authority ahead of an election in May 2019. The cabinet will also sign-off the North of Tyne’s economic vision, titled Home of Ambition, a statement which will underpin and guide the authority’s ambitions and investment priorities for years to come.

At Budget 2017, following Cabinet agreement, the government announced it was ‘minded to’ agree a devolution deal with the 3 councils north of the Tyne (Newcastle City Council, North Tyneside Council and Northumberland County Council) providing a mayoral combined authority was established and the councils took the statutory steps for the proposed devolution of powers.

The Parliamentary Order for the North of Tyne Devolution Deal was laid on the 24 July 2018. The approval of the North of Tyne motion in the House of Lords on Thursday (1 November) and the signing of the order by Northern Powerhouse Minister, Jake Berry MP, preceded the creation of the new North of Tyne Combined Authority.

The Combined Authority will have wide-ranging powers including control over housing policy – a policy area in which the 3 councils have already made significant progress. The new North of Tyne Housing and Land Board, chaired by Sir Edward Lister, held its inaugural meeting on Friday 6 July in Newcastle to discuss how to rapidly accelerating house-building in the North of Tyne. The 3 North of Tyne councils committed to an increase in a rate of delivery from 1,800 to 3,000 new homes per year up to 2032, helping to provide much-needed homes more quickly.