Route back to normality: testing 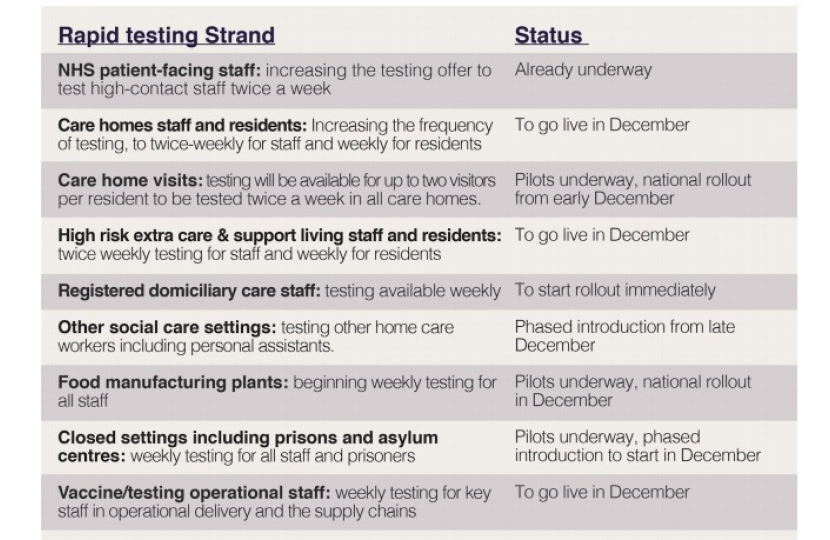 Testing capacity for those with COVID-19 symptoms has increased almost five-fold in six months, from 100,000 a day at the end of April to 500,000 a day by the end of October, with plans to go even further by the end of the year. This is available to citizens in every part of the UK.

Altogether, over 37 million tests have been conducted11, more than any other comparable European country. The Government has opened over 680 test sites, reducing the median distance travelled for a test to 2.6 miles12. Utilising new testing technologies and building new labs will significantly increase the scale of testing, enabling much more testing of key groups such as NHS staff, care homes and social care, as well as creating surge capacity to target cities and regions where needed.

The Government is working to improve turnaround times for these tests despite the increase in scale and logistical complexity in the expanded network. The Government is working with local Directors of Public Health to ensure that Local Authorities play a key role in helping deploy testing in ways that reach people most at risk of having the virus and those working in settings where there is the highest risk of transmission.

The increase in testing capacity has been supplemented by work to improve contact tracing. In the last week of reported figures (5 to 11 November) 156,853 people were transferred to the contact tracing system, 85% of those were reached and asked to provide information about their contacts and 78% of those contacts whose details were provided responded to notifications asking them to self-isolate. Work to improve contact tracing continues, including the roll-out of tracing partnerships with Local Authorities to ensure a greater proportion of people who have tested positive are reached, help provide the support they and their families need to self-isolate successfully and more quickly, and identify and reach any contacts they have had outside their immediate household. In addition, the NHS COVID-19 app has been downloaded 20 million times, and this is supporting the contact tracing effort, including through use of the QR code check-in capability.

To date, testing has focused on symptomatic testing, testing in areas with outbreaks and protecting those most at risk, for example in care homes. Those efforts will continue but the use of testing is now being broadened to identify those showing no symptoms who can infect people unknowingly. The Government plans to introduce frequent testing as an alternative to the need for self-isolation for people who have had close contact with someone who has COVID-19. Instead, contacts will be offered regular tests as an alternative to isolation and only have to selfisolate if they test positive. This will be trialled in Liverpool first, then some institutional settings (e.g. the NHS, care homes, education, employers) before the end of the year, ahead of rollout across the country from early next year.  The Government has been working to validate new testing technologies, and there are now three main forms of test in addition to PCR which are available for deployment: lateral flow devices, LAMP (Loop Mediated Isothermal Amplification) and LamPORE. Lateral flow devices are already available at significant scale, and so are the focus of our near-term expansion of rapid testing.

The immediate priorities for the expansion in asymptomatic testing are laid out in the table above. They are based on areas where the most vulnerable in society need to be protected and where more positive cases are expected to be found. The Government is working to increase capacity further into 2021 and will consider additional strands in due course, as well as looking to enable further delivery of tests in the private sector and in partnership with universities. All of this capability will help the Government to target measures to find cases quicker than before and break chains of transmission.

The Government will continue piloting further rapid testing in schools, colleges and universities, and will deploy rapid testing for specific one-off events. This includes testing university students before they travel for Christmas, starting from 30 November, as well as supporting universities to establish sustained testing regimes. Regional testing pilots in Liverpool (over 100,000 people tested at asymptomatic test sites)14 and Merthyr Tydfil have trialled offering rapid tests to a wider population and are making a contribution to a fall in positive cases alongside other measures.

These pilots have helped the Government to develop an offer for a rapid community testing surge. The community testing programme will offer Local Authorities in tier 3 areas the opportunity to participate in a six week testing surge. This will enable Local Authorities to offer tests to the general population as well as targeting high-risk workplaces and industries, hard-to-reach communities and schools in a coordinated effort to drive prevalence down. It will be delivered in partnership with Local Authorities to ensure it is tailored to local circumstances and need. The Government is also working with the devolved administrations to coordinate on testing plans and deliver additional testing capability in Scotland, Wales and Northern Ireland.

The Government will continue, in all tiers, to use early-warning mechanisms like waste-water testing, providing rapid tests for deployment by Directors of Public Health, expanding partnerships on contact tracing and deploying flexible testing sites where outbreaks occur. This should help reduce prevalence further in areas of lower prevalence, enabling a greater range of normal activity to continue.

This winter strategy is backed by an additional £7 billion for NHS Test and Trace to support increased testing, including community testing and ongoing improvements to tracing, taking the overall funding provided for Test and Trace this financial year to £22 billion.

Testing of visitors to care homes

The Government recognises the huge importance and health benefits of visits to people in care homes and their loved ones. The Government wants to bring an end to the pain of separation and help care homes bring families and loved ones together in a way that recognises the risks, but enables these to be managed in the best way possible. The launch of visitor testing is a crucial step to making that happen and this approach is currently being piloted in 20 care homes. The Government is committed, by Christmas, to providing twice weekly testing to enable all care home residents to have regular visits from up to two visitors. If a visitor has a negative test, is wearing appropriate PPE, and follows other infection control measures, then it will be possible for visitors to have physical contact with their loved one, such as providing personal care, holding hands and hugging. Detailed guidance will be published shortly.

Testing of people entering the UK from abroad

ALL GOVERNMENT ADVICE IS CONSOLIDATED IN ONE PLACE