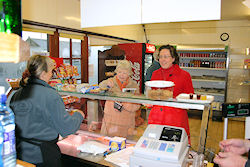 Chevington with Longhorsley combines an inland rural area surrounding Longhorsley with villages nearer the coast, including South Broomhill, Hadston and Red Row. Anne-Marie lives five miles from Longhorsley, in Netherwitton, and does her local shopping in the Millar's Sandwich Shop. Longhorsley has a long history and is the site of an ancient Pele Tower.

Hadston is an historic village close to Druridge Bay Country Park, a reclaimed and landscaped former open cast mine. Broomhill colliery produced coal until the middle of the twentieth century. Anne-Marie has worked closely with local Conservative Councillor Glen Sanderson in the fight to save the day care centre and after school club at the Coquet Children's centre in Hadston.