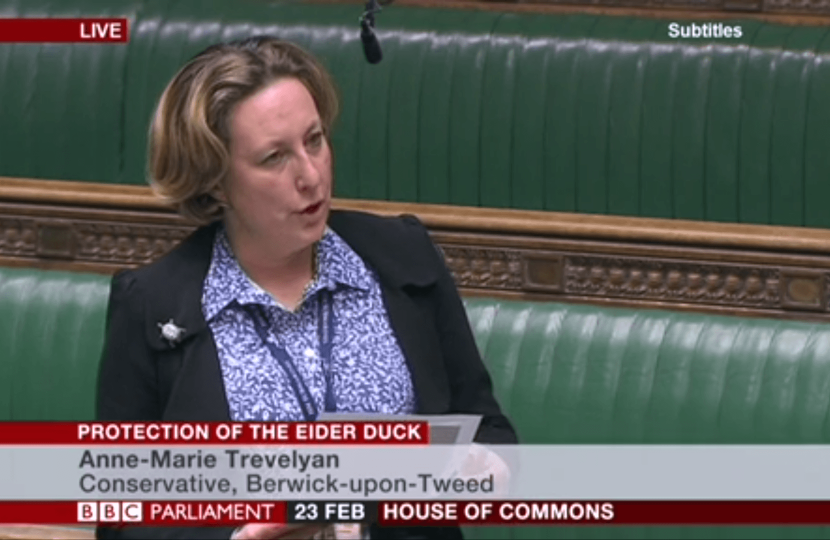 Anne-Marie Trevelyan, MP for Berwick-upon-Tweed, took to the floor of the House of Commons on Friday afternoon to make the case for protecting the Eider Duck in Marine Conservation Zones in an Adjournment Debate the she called.

The creation in recent years of 50 Marine Conservation Zones – with more planned - by this Government would no doubt receive the approval of St Cuthbert, who first protected the Eider Duck well over a thousand years ago, as the delineated zones along our unique coastline provide protection for wildlife and our marine environment. The Marine Conservation Zones have been created to protect important marine wildlife and their habitats and form part of what is now popularly known as the 'Blue Belt'.

Anne-Marie said in the debate “Our spectacular Northumbrian coast is teeming with wildlife, from seabirds as rare as the roseate tern to my personal favourite, the delightful and ungainly puffin, who flies like a fast jet; to porpoises, grey seals, dolphins and the occasional whales. And that's just what you can glimpse from above the water! Below the surface Northumberland’s blue belt is a bustling city of crustaceans and molluscs, alongside an extensive and healthy fish population. However, St Cuthbert would be disappointed to discover that within the Coquet to St Marys MCZ lies the uninhabited (by humans) Coquet Island which does not –yet - include amongst its protected species the eider duck.”

Anne-Marie explained why the Eider Duck needed protection by saying “In Britain, Eider are currently classified as Amber on the Birds of Conservation Concern in the United Kingdom (BOCC). Disturbance is the primary threat to Eider, resulting in loss of access to feeding areas and increased predation at breeding grounds. There are several studies considering the Common Eider in relation to human disturbances… Our Northumberland coast’s resident eider populations have continued to decline steadily over the last few decades, and so protection of their sea-based feeding and wintering habitats is essential.

In response to Anne-Marie, George Eustice who is the Minister at the Department of Environment Food and Rural Affairs said “are considering that proposal very carefully, and the comments that my hon. Friend made in highlighting that in this debate today were well made. I will ensure that the Under-Secretary of State for Environment, Food and Rural Affairs, my hon. Friend the Member for Suffolk Coastal (Dr Coffey), who leads on this issue, and the officials dealing with the MCZ process, are informed of the points that have been made….We have had a good debate. My hon. Friend raised some important points. I hope she will understand that I am not able to say today exactly what the conclusion ​or shape of the consultation will be, but I hope I have reassured her that my Department is much sighted on the issue. We are passionate about the importance of the eider duck. I assure her that her proposal is receiving very close attention indeed.”

Following the debate Anne-Marie said “I am glad that the Government will be looking at these proposals very closely. The history of the Eider Duck is so closely entwined with the history of Northumberland, as St Cuthbert, who first protected the Eider, is the patron saint of Northumberland, it was natural that the eider should be chosen as the county’s emblem bird, and eiders are still often called Cuddy ducks in the area, with Cuddy being the familiar form of Cuthbert. A stained-glass window in St Cuthbert’s church in Amble commemorates this long-held association. I will be continuing to press the Government for these protections for this special bird and would encourage everybody to go and see these special birds for themselves.”