Anne-Marie speaks up on behalf of local WASPI women 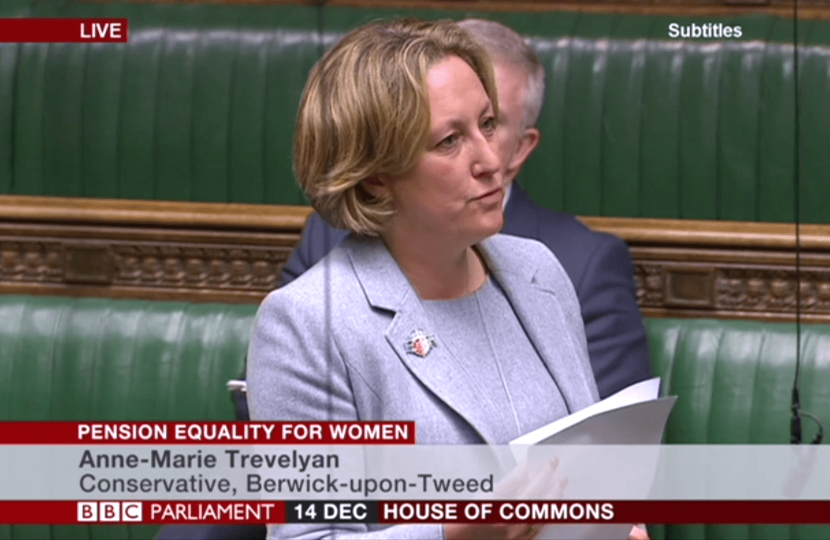 Anne-Marie Trevelyan supported and spoke in a debate to speak up on behalf of WASPI women across the country and in Northumberland. The debate was held in the House of Commons to discuss those women hit by the acceleration of the equalisation of the State Pension Age, first in 1995 and then in 2011.

The Women Against State Pension Inequality (WASPI) campaign works to lobby the Government to introduce transitional arrangements for those women affected, many of whom were not notified about the changes, and took early retirement, leaving them with lower-than-expected incomes. Many women from across rural Northumberland have contacted Anne-Marie to say they have been affected by the changes, and Anne-Marie has met and been in contact with local groups since the campaign started. Furthermore, Anne-Marie is a founding Member of the All-Party Parliamentary Group on this issue.

Anne-Marie said “I was delighted to speak on behalf of my constituents and women across the country. I was honoured to have a number of WASPI women from my patch in the public gallery to watch the debate and see the points I raised on their behalf”.

“As a believer in the power of people peacefully coming together to campaign for change and working together for what they believe is right, I am completely supportive of the WASPI women across the country, who are campaigning. These women served our nation in many different forms and guises and have been the backbone of our nation’s economy since they started work in the late 1960’s. Women in Northumberland have faced age discrimination when trying to get back into the workplace and the problems of this issue are compounded by the problems of connectivity and rural transport – with some women living miles from bus stops and without the provision of a car, and hearing their stories has been incredibly frustrating as I want to help and support these women.”

“Too many women have told me of the inefficiency and inconsistency in the treatment of their cases by the DWP, and I have asked the Pensions Minister to tackle the impasse that this campaign and the Department seem to have reached. I have tried on the behalf of my constituents to bring all the parties together for a considered, open discussion in order to provide some progress on these historical failings.”

“Whatever the historical failures of communication on the changes to the pension age, and regardless of which Government, of whichever colour, failed to get this right over the past 20 years, the key questions for me are how we now start to work together, listen to the Parliamentary and Health Service Ombudsman and tackle the failure to deal with the WASPI women’s complaints. We want to ensure that the Department puts in place rigorous processes for the pension age changes that are no doubt to come. I am sure that I will be 80 before I am allowed to retire, and I want to be certain that, whoever is in government, the Department is comfortable that it has robust processes in place so that this situation can never happen again.”

You can find a link to Anne-Marie’s speech here