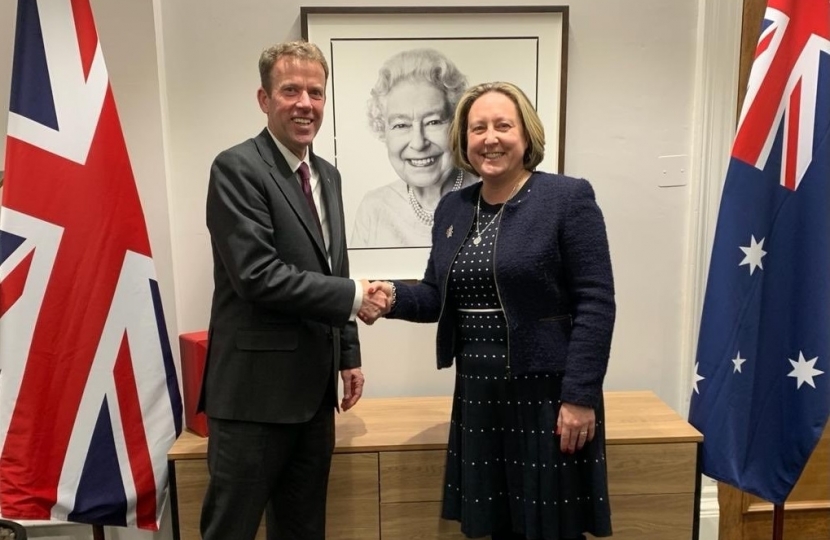 Tonight, Australian Trade Minister Dan Tehan and I have signed the trade deal between the United Kingdom and Australia - the first comprehensive Free Trade Agreement that the UK has negotiated entirely from scratch since leaving the European Union, and a huge win for the people of our countries. Built on our shared belief in free trade and high standards, it goes further than we've ever gone before in many areas, and leads the way in showing what a modern, cutting-edge trade deal can achieve.

It will give our two like-minded countries huge new opportunities to collaborate on shared challenges like tackling climate change, unfair trading practices and growing the low-carbon economy. And it unleashes brilliant British businesses to trade and invest more freely with Australia.

This deal eliminates tariffs on 100 per cent of UK exports, including flexible rules of origin, meaning that UK businesses can use some imported parts and ingredients and still qualify, allowing them to be more competitive and grow their business.

It removes tariffs on Aussie favourites like Jacob's Creek and Hardys wine, and Tim Tams. It will encourage new companies to enter the market, including small businesses and family-run firms, who will find it easier, cheaper and faster to sell their fantastic goods and services to Australia for the first time.

This deal also supports the economy of the future with the world's first ever dedicated innovation chapter. It forges greater cooperation on things like 5G and cybersecurity and provides new opportunities for young Britons to live and work in Australia.

For the first time, it will give UK firms guaranteed access to bid for over £10 billion worth of Australian public sector contracts on an equal footing with Australian firms.

All of these huge wins for the UK have been achieved without compromising on our world-class food, animal welfare, and environmental standards. All imports into the UK will have to comply with our existing requirements - including the ban on hormone beef. Both countries have committed to not reducing animal welfare standards to undercut the other, as well as affirming their commitment to tackling climate change.

Taken together, this agreement unlocks £10.4 billion of additional trade - a whopping 53 per cent increase - boosts the UK economy by £2.3 billion and increases household wages by £900 million. We will see these benefits right across the UK, from Scotland's financial services industry to aerospace designers and manufacturers in the West Midlands to Welsh fintech companies and car makers in the North-East.

This is a British-shaped deal with one of our closest friends and allies , showing what we can do as an independent trading nation. It is part-and-parcel of our international trade strategy, realising untapped trading opportunities with like-minded trading partners around the world.

Last week we signed an Agreement in Principle on a digital trade agreement with Singapore - opening up digital markets for British businesses to an ideal gateway into the wider Indo-Pacific.

Next year will be a five-star year for British trade as we look to begin formal negotiations on deals with Canada, Mexico, the Gulf Cooperation Council and India. The way paved by our Australia deal, and the Agreement in Principle already reached with New Zealand, the UK will also look to make major progress in joining the Trans-Pacific Partnership , a huge free trade area with a combined GDP of £8.4 trillion, including many of the Pacific region's most dynamic economies, from Japan to Mexico.

And, unlike our membership of the EU, all achievable without losing control of our laws, borders or money.

The deal I have signed today is just the latest success in achieving this government's agenda to level up and spread prosperity to every region and nation of the UK, with more high pay jobs, cheaper inputs for businesses, and a greater choice of goods at competitive prices for consumers.