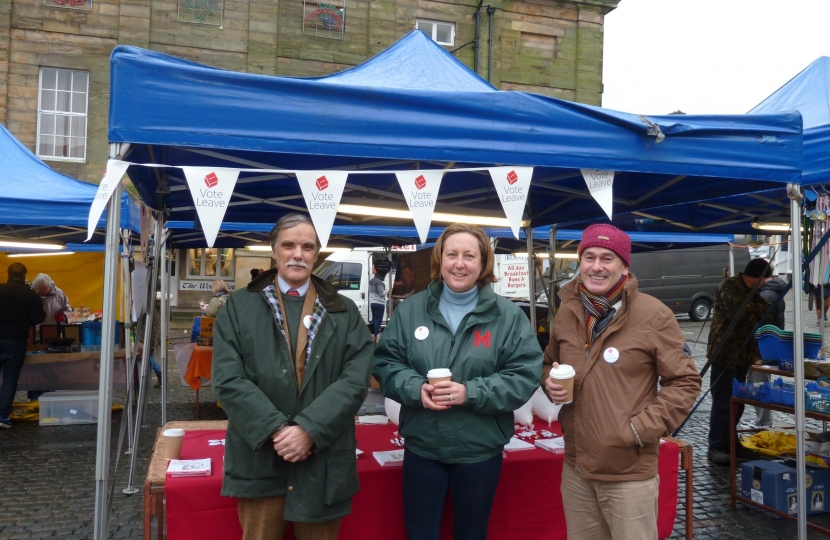 We have now seen the full extent of the agreement reached between the Prime Minister and the European Council for what Britain's continued membership of the European Union would entail. After days of talks, we saw that the EU technocrats have watered down the modest proposals the Prime Minister brought to the negotiating table, and the changes outlined can be voted down by MEPs.  This would not enable us to take back control and the proposed graduated changes to EU migrants’ ability to immediately claim benefits will not be backed up by a treaty. If this is how the UK’s serious concerns are treated by Brussels when we threaten to leave, I dread to think how they would treat us if we voted to stay in.  The safest option is to leave and forge ahead with our own trade agreements with Europe and the wider world.

We are going to hear a lot of scaremongering in the coming months about how Britain is dependent on the EU’s political institutions and cannot manage without them.  I think that’s absurd.  We are and always have been a strong, outward-facing nation, perfectly capable of striking trade deals, doing business and working together with the rest of Europe and the world, without needing EU politicians to tell us to.  Without the constraints of EU red tape and without having to funnel huge sums of money through Brussels, we will have the capacity and resources to ensure our farmers are better supported, work up more favourable trade deals, and decide our own migration policy which would enable us to welcome the brightest and best from Europe and the wider world. The safest option is to vote to leave the EU’s political institutions, and to move forwards without their additional bureaucracy holding us back.  So many of our laws are decided without any accountability to the British people.  We can take back control of our future if we vote to leave the EU. A future beyond the limitations of the EU’s political systems hold so much promise for a strong nation such as ours, and I look forward to campaigning for it in the coming months.

For me there are four key issues at stake: control of our laws and how we spend taxpayers’ money, the security of our nation, taxes and trade.

We are the second largest net contributor to the EU:  we pay in some £20 billion per year (£350 million per week), receiving back around £6.5 billion. Of the money the EU kindly gives back to us, around £3 billion is allocated for agriculture, mostly for basic payments to farmers through the Common Agricultural Policy. How this money is allocated is decided by the EU and the UK Government simply distributes it according to their rules.

Every British Government has always supported its food and farming industry and I believe that our farmers would be able to help Government build a better, more appropriate support framework, knowing the best ways to maximise our land usage for food production. For the last 20 years farmers have told me that the CAP frameworks are not doing the best they can to support British farmers.  Recently there have been months of delays to farmers’ payments as a result of EU red tape as the Farming Minister, George Eustice confirmed to the House of Commons: “Under regulations and law, the EU requires certain inspections and verification to be carried out. The truth is that we tried to get the [European] Commission to relax those requirements to enable us to expedite payments this year, but it refused. We cannot make those payments from the EU until those various checks and the validation of claims have been completed.”  I know we can do better for our farmers and our country if we take control by voting to leave the EU.

There is a lot of talk about us being ‘safer’ in the EU – I fundamentally disagree with this, especially because the direction of travel of the EU is to create a European Army over which we would have no democratic controls but to which we would have to contribute resources and manpower.  We have always had the best armed forces in the world.  They work, through NATO, to protect the UK, & to support military and humanitarian work around the globe.  If any European nation – an ally through NATO – was in trouble, we would always go to their assistance.  The most important element in preventing terrorist attacks is intelligence. Intelligence must be handled carefully, which is why the sharing of intelligence is bilateral between individual states. It is not done through the EU. These critical bilateral relationships are in everyone’s interests and would continue regardless of being in or out of the EU. Our closest intelligence relationship by far is not with any EU member state but with the US. We do not need to be tied into the EU for our security or Europe’s.

We have lost control of who comes into our country and on what terms. We have lost control of who we can deport. The former head of Interpol described the EU border system as like hanging a welcome sign to terrorists around our neck. Rob Wainwright, chief of Europol, the EU police agency, said last week that up to 5,000 terrorists trained by Islamic State in the Middle East are now back in Europe. Colonel Richard Kemp, former head of Government anti-terrorism says this is a huge threat to our security: “Many are experienced killers. While we remain in the EU these terrorists have the right to come freely into our country. None of this was envisaged when we joined the EU. By leaving we will again be able to determine who does and does not enter the UK. Failure to do so significantly increases the terrorist threat here” We will be more secure after we vote leave and take back control.

I am increasingly frustrated that we cannot fully determine our own tax policy particularly with regard to VAT.  The recent public outcry over the high rate of VAT levied on sanitary products is a classic example. It turns out we cannot do anything to reduce VAT on sanitary products unless we seek permission from the 27 other states and we are not allowed to make them tax exempt items – this sort of external determination of matters which should always be the nation’s to make is a madness. The reality is the only way to change that is for us to take control of our taxation system by voting to leave.

A lot of the scaremongering arguments made by those who would prefer us to remain within the EU centre around trade, and our potential to do business outside the EU’s political system.  It is nonsense to suggest that, if we left the political constraints of the EU and the red tape of Brussels, we would stop trading with other EU nations.  For starters, the UK is the EU’s biggest market for exports.  They rely heavily on trading with us.  It would be nonsensical and costly to the EU to cut off trading relationships.

The UK is the world’s 5th largest economy.  We are perfectly capable of negotiating our own trade deals with EU nations, and the wider world.  In fact, leaving the EU would give us much greater freedom to draw up favourable trade deals with non-EU nations. This non-EU trade is more important than ever – since 2010, every region of the world has experienced significant economic growth, except Europe.  We do our businesses - including the 6% of British businesses who rely on EU trade -  no favours if we continue to look inwards towards Europe, rather than out to the wider world for our trading relationships.

Imagine what we could do if we stopped sending £350 million to Brussels every week. That's enough to build a new hospital every week. It's 60 times what we spend on the NHS Cancer Drugs Fund. After we vote to leave, we can spend our money on our priorities. In my view, the safest option is to vote to leave the EU’s political institutions, and to move forwards without their additional bureaucracy holding us back.  So many of our laws are decided without any accountability to the British people.  We can take back control of our future if we vote to leave the EU.