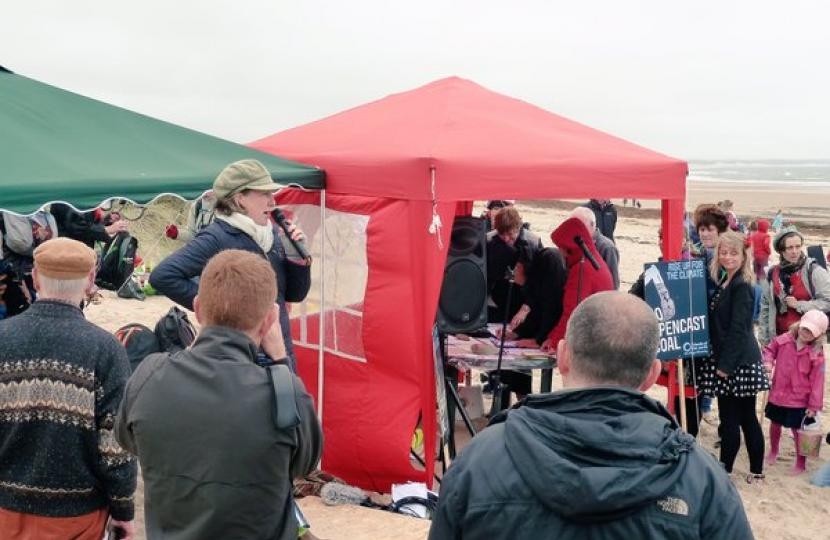 Anne-Marie  has written to the Communities Secretary, James Brokenshire MP who has responsibility for the National Planning Policy Framework, to ask him to consider changes to the framework that would prohibit the further development of opencast coal mines.

The letter follows the successful undertaking by the Save Druridge Bay Campaign, Anne-Marie and people throughout North Northumberland to stop the proposed opencast mine at Druridge Bay. The decision to reject the application was made by the previous Communities Secretary, Sajid Javid who refused the application for numerous reasons, including the adverse effect it would have on the economy and natural beauty of the area, but also due to the fact “the scheme would have an adverse effect on greenhouse gas emissions and climate change of very substantial significance”.

In the letter, Anne-Marie spells out how opencast mining is incompatible with stated Government policy on climate change, and doesn’t align with how the Government is leading the ‘Powering Past Coal Alliance’ which is an alliance of nations, states, cities and organisations committed to moving the world from burning coal to cleaner power sources.

Anne-Marie said “The decision to refuse the Druridge Bay application was an historic one, and not just for those of us in Northumberland. Opencast mining can have severe implications on areas of incredible natural beauty like ours, and cause damage to the tourism economy and the fabric of the community. Furthermore, the damage that it can cause to our environment through greenhouse gas emissions means that is simply no longer right for our environment that such applications be accepted.”

“Britain is taking a global lead on tackling climate change, and action to change planning laws would strengthen that leadership by example. It would send a strong signal to countries across the globe about our commitment to tackling polluting fossil fuels and towards greener solutions for energy. It is my ambition that we build on what has started in Druridge Bay, and to help make this the greenest Government in British history”.