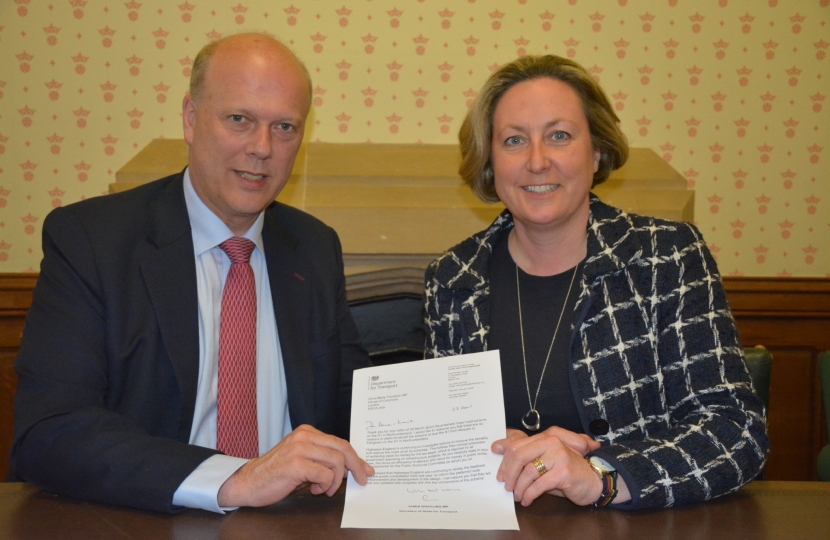 The Transport Secretary took the opportunity to squash efforts by local political parties to tell people the A1 dualling is under threat, despite the fact that the £293 million funding the MP secured for the project is already committed.

Anne-Marie said: “It was great to be able to talk through the plans with the Transport Secretary and receive his confirmation that the plans continue apace – I know there had been concerns that the NAO report suggesting ways in which savings could be made in the future, might mean a threat to our A1 plans – I welcome Chris Grayling’s confirmation that is not the case.  I was especially pleased to have his support for my campaign to dual the A1 up to the Scottish border once the present scheme has been completed.”

The MP – who sits on the House of Commons Public Accounts Select Committee which commissioned the National Audit Office report in to future road investment – had been bemused by suggestions that seeking value for taxpayers’ money in future projects would constitute a threat to the A1 project which is well underway.  The Transport Secretary has confirmed once and for all, that the project continues to schedule.

Speaking in the Commons yesterday, Chris Grayling said: “I was pleased to be able to confirm to Anne-Marie that the work on dualling the A1 in Northumberland remains on track, and work continues apace as the Highways England team builds up to the route announcement in the coming months.  It is disappointing that there has been a need for me to clarify this at all – it seems some local political groups seem intent on scaremongering and spreading lies. I am happy to confirm that any fears are unfounded and that I support Anne-Marie’s vision for dualling the A1 up to the Scottish border.”

Highways England also confirmed to the MP, and many of those who attended the recent consultation events, that their timetable remains on course.  The route announcement will be made in the coming months, for the dualling work between Morpeth and Ellingham.  Major improvement works to the stretch north of Ellingham will commence in 2018.

Below are copies of Anne-Marie's letter to the Transport Secretary, his reply and the latest update from the A1 in Northumberland team at Highways England.